Data centers are the second largest carbon producer after the aviation industry and as such they have come under increased scrutiny for their contribution to growing carbon emissions. Currently 3% of electricity produced globally is coming from the data center industry and with our increasing reliance on the internet, this isn’t expected to slow down any time soon!

Despite government efforts to combat the issue, improvement in decreasing carbon emissions in the data center industry has been relatively slow. Data center managers remain focussed on optimizing around the clock functionality and unfortunately environmental impact is not always treated as a priority. However, with increased scrutiny from both governments and shareholders the data center industry will have to adopt a more environmentally friendly approach.

What is the motivation to be carbon neutral?

The EU target is that 80% of data center power should be renewable by 2020 so data center engineers must consider how they will achieve this. It is more commercially attractive to pre-empt regulations rather than adapt at the last minute. Integrating these protocols and pre-empting future changes in policy should be done at the design stage to prevent the added expense of having to catch up and adapt equipment further down the line.

Data center managers who aim for a reduction in carbon emissions will see cost reductions as a decrease in consumption of power will go straight to the bottom line.

Introducing measures to decrease carbon emissions can have a positive impact on the corporate social responsibility of the company. Being branded as a ‘green’ data center can present a great opportunity for data centers to differentiate themselves from their competitors.

There are multiple factors of a data center that effect energy usage, but with some consideration for energy and slight changes to current approaches, a data center can be close to 100% carbon neutral.

The cooling process in data centers is responsible for the majority of power consumption. Inefficiencies in traditional cooling techniques largely contributed to increased carbon emissions. The introduction of cold aisle corridors and free cooling have had a positive impact on energy usage. Cold aisle corridors are created by placing the servers in aisles with a roof and doors at either end making it completely closed off. Because only these server passageways require cooling, the energy needed is greatly reduced. Companies should also consider the idea of free cooling. This method makes use of the low external (and free!) air temperatures to chill the water which is used in cold aisle corridors.

Traditionally data centers have been cooled to 20-25°C with relative ambient humidity of 50-60%. It is now thought that with the advances in technology, data centers don’t need to be as cool as previously thought. A tropical data center project in Singapore has shown that data centers can operate safely at temperatures up to 38°C with relative humidity 90%+. Easing the cooling limits could result in a 40% cut in energy costs, greatly reducing carbon emissions!

The objective of installing an effective power quality management system is to highlight areas in the current power and cooling practices that may be causing problems or could be improved. Data center managers can identify systems that need updated or removed before they cause more serious problems. This knowledge enables the successful implementation of a DCIM solution, which offers rich analytics as well as enhanced efficiency and money saving capabilities.

Innovative advancements have allowed data centers to improve on their PUE with the aim of lowering their number as close to 1 as possible. This increased energy efficiency reduces the carbon emissions from data centers and cuts energy costs for customers. There are various practices data centers can implement to better their PUE including effective cooling techniques (as mentioned above), using temperature monitoring systems in server rooms and focussing on insulation efforts.

The use of solar panels is a worthwhile long term investment for data centers. Making use of unused roof spaces means there is no additional space required for the panels. Solar panels are extremely reliable and low maintenance, ensuring a quick payback on the installation. Harmonic filters reduce harmonic distortion in the solar panels to as low as 5%, resulting in a safe and reliable energy supply.

Facebook are trying to decrease their carbon emissions; they are currently building a data center in Ireland that will be powered by the country’s wind resource. They have committed to powering half of their infrastructure from renewable sources in the next 3 years.

With the focus on the effects of carbon footprint more predominant than ever, all industries are being encouraged to do their share to improve our environment. Even small changes to data centers current practices as well as implementing new systems can have a positive impact on carbon emissions, as well as reducing overall operational costs! 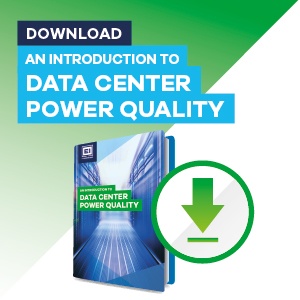